A better look into cerebrospinal fluid 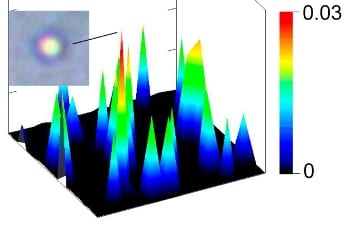 Cerebrospinal fluid (CSF) of the central nervous system disseminates numerous cells, proteins, microparticles, and DNA as potential biomarkers of many diseases and therapy efficacy. For example, circulating tumor cells are a sign of metastatic cancer, bacteria can reveal an infectious meningitis or encephalitis, erythrocytes indicate a trauma, and tau-protein is a biomarker for Alzheimer’s disease. However, current methods for detecting biomarker in CSF are far from ideal. A main drawback is that the tests are performed in vitro, and their sensitivity is limited by the sample volume. Rare circulating biomarkers such as tumor cell at the stage of latent metastasis remain undetectable. Furthermore, cytology is a quite subjective method depending on the experience of the laboratory technicians. That said, other current methods show even higher false-negative results than cytology.

The problem could be solved by examining a larger volume. Ekaterina I. Galanzha and a team from the University of Arkansas for Medical Sciences thought to examine the whole CSF volume. To pursue this objective, they developed a method using in vivo photoacoustic flow cytometry (PAFC) for ultrasensitive detection of cells and nanoparticles in CSF. During PAFC, non-radiative relaxation of absorbed laser energy into heat leads to thermoelastic generation of sound. PAFC is not sensitive to light scattering or autofluorescence and provides higher sensitivity and resolution in deeper tissue than other optical modalities. When CSF is irradiated through skin, photoacoustic waves from individual cells can be detected with an ultrasound transducer attached to the tissue over ventricles or spinal cord. The method is noninvasive for normal tissues as it operates with laser energy at levels that are safe for humans.

To extend diagnostic significance, PAFC was integrated with photothermal scanning cytometry/microscopy ex vivo using label-free mode as well as molecular targeting with low-toxicity bioconjugated nanoparticles. In photothermal thermal-lens schematic, laser induced temperature-dependent variation of the refractive index around absorbing zones is optically detected. Contrast can be enhanced by labeling cells or molecules of interest with specifically binding nanoparticles such as gold nanorods. In the experiments, two types of nanorods were used with different absorption maxima for two color labeling.

In the CSF of tumor-bearing mice, the researchers molecularly detected in vivo circulating tumor cells before the development of breast cancer brain metastasis with 20-times higher sensitivity than with current assays. For the first time, they demonstrated assessing three pathways – blood, lymphatic, and CSF – of circulating tumor cells dissemination, tracking nanoparticles in CSF and their imaging ex vivo. The scientists were able to count leukocytes, erythrocytes, melanoma cells, and bacteria in label-free CSF samples. In addition, they could image intracellular cytochromes, hemoglobin, melanin, and carotenoids, respectively, by labeling with specific binding gold nanorods.

Taking into account the safety of PAFC, the researchers expect its translation for use in humans to improve disease diagnosis beyond conventional detection limits.

Real progress made this year in the fight against malaria
Copper nanoparticles an effective spermicide
What are mRNA vaccines?
The best model for understanding illnesses in newborns