Solid nanoporous electolyte developed at ORNL could solve many of the safety concerns associated with current lithium-ion technology. 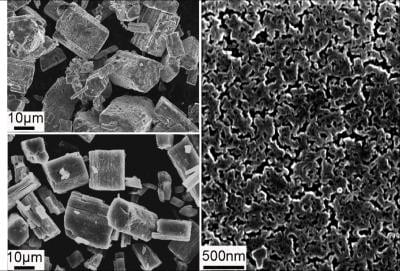 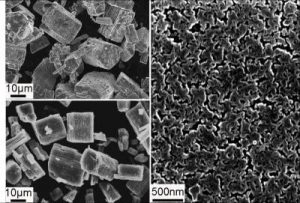 Today’s lithium-ion batteries rely on a liquid electrolyte, the material that conducts ions between the negatively charged anode and positive cathode. But liquid electrolytes often entail safety issues because of their flammability, especially as researchers try to pack more energy in a smaller battery volume. Building batteries with a solid electrolyte, as ORNL researchers have demonstrated, could overcome these safety concerns and size constraints.

“To make a safer, lightweight battery, we need the design at the beginning to have safety in mind,” said ORNL’s Chengdu Liang, who led the newly published study in the Journal of the American Chemical Society. “We started with a conventional material that is highly stable in a battery system – in particular one that is compatible with a lithium metal anode.”

The ability to use pure lithium metal as an anode could ultimately yield batteries five to 10 times more powerful than current versions, which employ carbon based anodes.

The ORNL team developed its solid electrolyte by manipulating a material called lithium thiophosphate so that it could conduct ions 1,000 times faster than its natural bulk form. The researchers used a chemical process called nanostructuring, which alters the structure of the crystals that make up the material.

“Think about it in terms of a big crystal of quartz vs. very fine beach sand,” said coauthor Adam Rondinone. “You can have the same total volume of material, but it’s broken up into very small particles that are packed together. It’s made of the same atoms in roughly the same proportions, but at the nanoscale the structure is different. And now this solid material conducts lithium ions at a much greater rate than the original large crystal.”

The researchers are continuing to test lab scale battery cells, and a patent on the team’s invention is pending.

“We use a room-temperature, solution-based reaction that we believe can be easily scaled up,” Rondinone said. “It’s an energy-efficient way to make large amounts of this material.”