A technique known as Identical Location Tomography is implemented to monitor the morphology of Pt catalyst particles before and after electrochemical cycling. 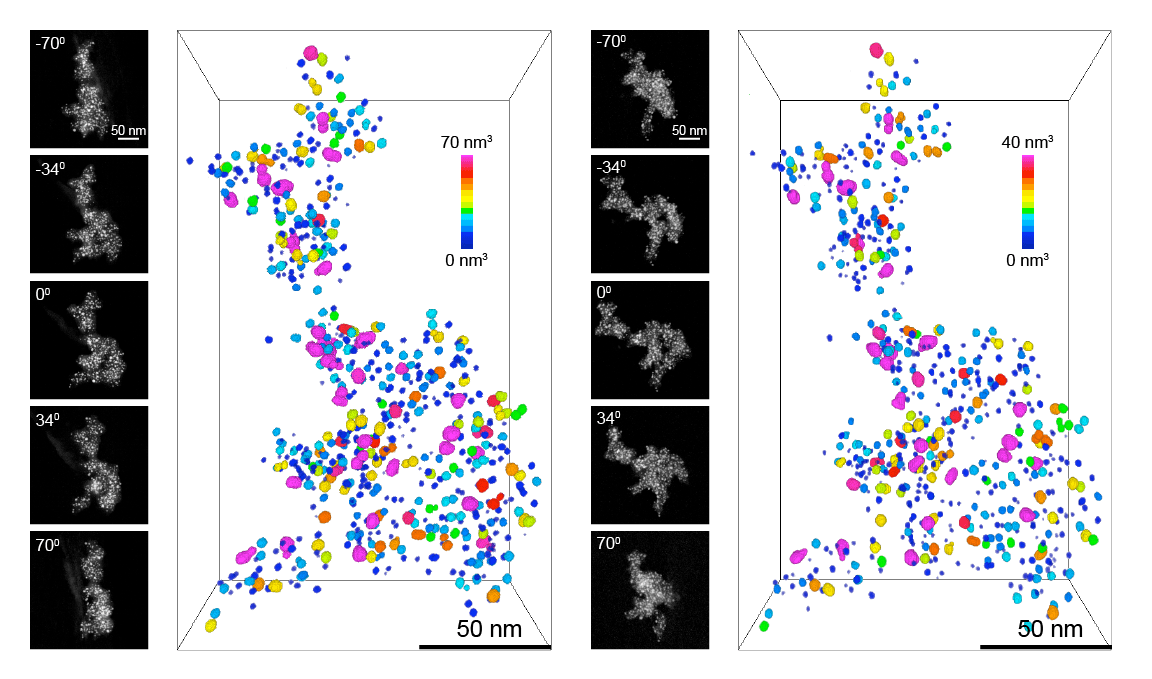 The study of materials at the nanometer length-scale level has become crucial to the development of more efficient technologies particularly related to medicine, electronics, and energy conversion. Imaging of materials at such fine scale requires the use of a transmission electron microscope (TEM) because of the higher resolution compared to light-based methods. Normally, TEMs provide two-dimensional (2D) projection views of an illuminated object, but depth information on the structures cannot be obtained. However, by using multiple projections of the object obtained by tilting the sample at difference angles (i.e. a set of 2D images) it is possible to reconstruct three-dimensional (3D) nanostructures of materials using a similar approach to magnetic resonance imaging in medical applications. Such a technique is known as transmission electron tomography and is well established in the field of catalysis and materials analysis.

In work recently reported by Gianluigi Botton and team at McMaster University in Canada, transmission electron tomography is used to provide an improved understanding of the degradation mechanisms of catalyst materials used in fuel cells, more specifically Pt nanoparticles (in a size range of 5 nm) supported on a carbon matrix mixed with a conductive Nb-based oxides. In this detailed investigation, the morphological changes of several hundreds of individual particles were monitored using “Identical Location Tomography”. This involved a 3D study of the initial state of the material deposited on a TEM support grid. The grid with the samples was subsequently carefully transferred into an electrochemical cell and subjected to simulated fuel cell aging conditions. After the electrochemical tests, the support grid was dried and transferred back to the electron microscope in order to characterize precisely the same locations that were initially studied (hence the use of “identical location” in this work).

This investigation carried out on these catalysts with electron tomography and more specifically the identical location tomography approach provides unbiased information on the evolution of the catalysts following electrochemical cycling, such as particle size evolution, possible degradation through coalescence, displacements, detachment and migration. Consequently, this methodology enables more informed decisions for the design of high–performance durable materials for fuel cell applications.