In a review by researchers at Harvard Medical School, MIT and the American University of Beirut, recent developments in injectable hydrogels for cardiac tissue repair are highlighted. 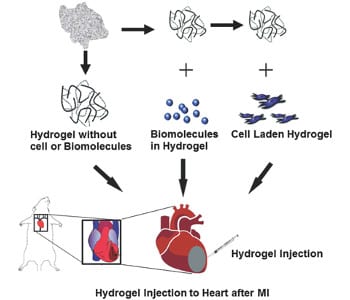 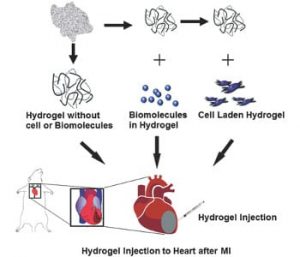 Cardiac tissue damage resulting from heart attacks is one of the major causes of death worldwide. Recently, hydrogels which can be injected into the body have become the focus of research as agents for cardiac repair and regeneration. In a review by researchers at Harvard Medical School, MIT and the American University of Beirut, recent developments in injectable hydrogels for cardiac tissue repair are highlighted.

Treatments which are currently available for cardiac tissue damage face a range of limitations. Heart transplantation is considered to be the best available treatment, but is of course associated with the challenge of finding an appropriate donor, and high risk of organ rejection. Other treatments, such as pharmaceutical therapy and the use of medical devices, can only help to alleviate symptoms and are ineffective in hindering the progression of heart disease. Therefore, injectable hydrogels may play a crucial role in the development of much-needed alternative treatments for cardiac tissue damage.

This review, in Advanced Science, explains how injectable hydrogels can be used as carriers for therapeutic drugs or biomolecules, facilitating targeted delivery of these molecules to the damaged heart tissues. Alternatively, these hydrogels can be used to form tissue constructs which function as cardiac tissues, to replace those which have been damaged during a heart attack. The latter has proven more challenging, and as of yet, no hydrogel composition has been developed which meets the standard for clinical cardiac tissue repair. It has also been hypothesized that hydrogels could be used to direct stem cells to the location of the damaged cardiac tissue, and to introduce a range of signaling molecules which may facilitate their differentiation and transplantation.

Although it seems clinical therapies in humans using injectable hydrogels for the treatment of cardiac tissue damage is some way off, animal experiments have shown promising results, stimulating further research in this area.