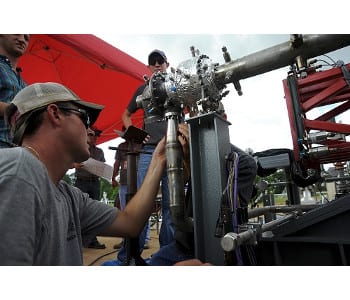 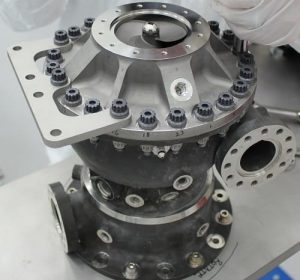 This rocket engine fuel pump has hundreds of parts including a turbine that spins at over 90,000 rpm. Credits: NASA/MSFC

One of the most complex, 3-D printed rocket engine parts ever made, a turbopump, got its “heartbeat” racing at more than 90,000 rpm during a successful series of tests with liquid hydrogen propellant at NASA‘s Marshall Space Flight Center in Huntsville, Alabama. These tests along with manufacturing and testing of injectors and other rocket engine parts are paving the way for advancements in 3-D printing of complex rocket engines and more efficient production of future spacecraft, as NASA the experts believe.

The turbopump is a critical rocket engine component with a turbine that spins and generates more than 2,000 horsepower – twice the horsepower of a NASCAR engine. Over the course of 15 tests, the turbopump reached full power, delivering 1,200 gallons of cryogenic liquid hydrogen per minute; enough to power an upper stage rocket engine capable of generating 35,000 pounds of thrust. 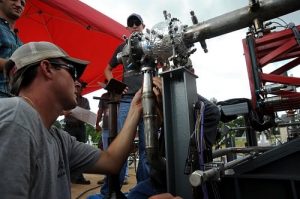 “Designing, building, and testing a 3-D printed rocket part as complex as the fuel pump was crucial to Marshall’s upcoming tests of an additively manufactured demonstrator engine made almost entirely with 3-D printed parts,” said Mary Beth Koelbl, deputy manager of Marshall’s Propulsion Systems Department. “By testing this fuel pump and other rocket parts made with additive manufacturing, NASA aims to drive down the risks and costs associated with using an entirely new process to build rocket engines.”

The 3-D printed turbopump has 45 percent fewer parts than similar pumps made with traditional welding and assembly techniques. Marshall engineers designed the fuel pump and its components and leveraged the expertise of four suppliers to build the parts using 3-D printing processes. To make each part, a design is entered into a 3-D printer’s computer. The printer then builds each part by layering metal powder and fusing it together with a laser – a process known as selective laser melting.

“NASA is making big advances in the additive manufacturing arena with this work,” said Marty Calvert, Marshall’s design lead for the turbopump. “Several companies have indicated that the parts for this fuel pump were the most complex they have ever made with 3-D printing.”