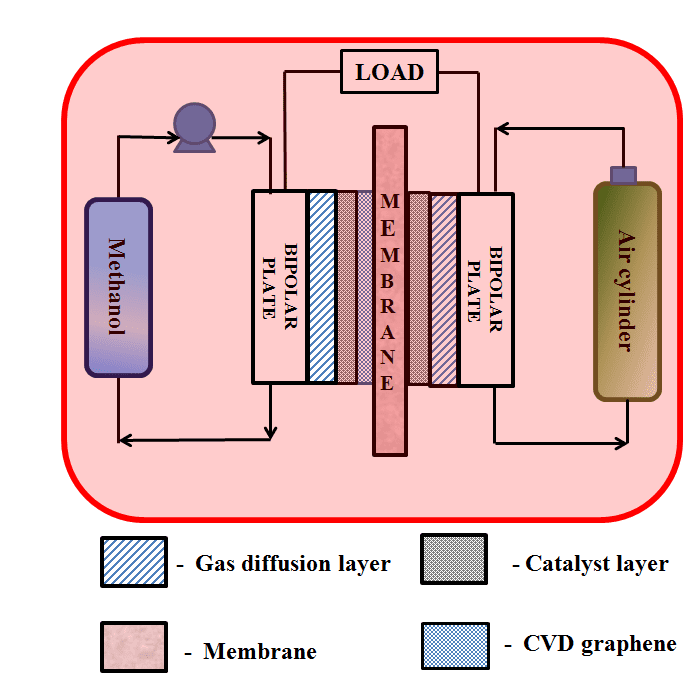 Fuel cells convert the chemical energy of fuels directly into electrical energy with a simple oxidation-reduction reaction. Methanol fuel cells are widely favoured due to their usage of methanol as a liquid fuel, simplicity of operation, and the higher energy density of methanol fuel. These fuel cells function in the following way: methanol  undergoes oxidation on the anode side, liberating protons and electrons. Electrons travel through the external circuit and protons travel through the membrane and reach the cathode side. Air undergoes reduction on the cathode side, utilizing electrons and protons from anode reaction to form water.

Methanol fuel cells have previously been hindered by crossover taking place in the membrane area of the fuel cells, leading to short circuits and greatly affecting the performance. More precisely, this could be defined as the diffusion of methanol from the anode to the cathode through the membrane. This methanol, instead of reacting on the anode side, reacts on the cathode side as well, hence generating a short circuit. Different membrane materials have been used that show improved performance by reducing the methanol crossover, however all of them also significantly reduced proton transport.

Andre Geim and co-workers previously discovered proton transport through single layer graphene and other 2D materials (Nature 2014 Geim et al). This presented the opportunity to use 2D materials in energy devices. However these materials have not yet been tested and used in an actual fuel cell. Now, in Advanced Energy Materials, researchers from the University of Manchester and Rice University report for the first time the testing of 2D material-graphene and hexagonal boron nitride in the membrane area of fuel cells. They observe a reduction in crossover with no changes in proton conductivity, with a performance improvement of up to 50%.

These results could be extended to other different fuel cell types, with the potential to lead to miniaturized fuel cells (due to the reduced thickness graphene replacing the membrane), and increased performance.