Formula Student car broke a world record accelerating from 0 to 100 km/h in 1.513 seconds over a distance of less than 30 m. 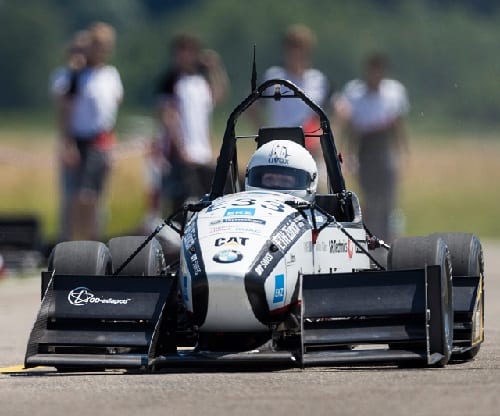 The grimsel electric racing car has broken the world record for acceleration by an electric car. The vehicle accelerated from 0 to 100 km/h in 1.513 seconds over a distance of less than 30 m. The record-breaking car was developed by Swiss students at ETH Zurich and Lucerne University of Applied Sciences and Arts. 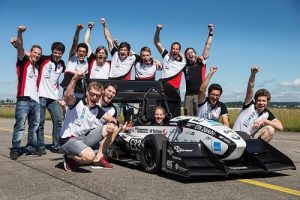 The Formula Student team at the Academic Motorsports Club Zurich (AMZ) accomplished its mission: the electric racing car accelerated as fast as no car before and set a new world record covering less than 30 m of track at the Dübendorf air base near Zurich. The previous world record stood at 1.779 seconds and was set last year by a team at the University of Stuttgart.

The record-breaking Formula Student electric car was developed and built in less than a year by a team of 30 students. Grimsel is AMZ’s fifth electric vehicle and sets new standards in lightweight construction and electric drive technology. Thanks to the use of carbon-fiber materials, it weighs just 168 kg. The four-wheel drive electric racing car has four specially developed wheel hub motors that are capable of generating 200 hp and 1700 Nm of torque. A sophisticated traction control system regulates the performance of each wheel individually, allowing the car’s acceleration to be increased even further. No large-scale production car – even one with a combustion engine – can reach a comparable acceleration.

The Swiss team celebrated considerable success in the international Formula Student competition back in the summer of 2014. With over 500 teams competing, Formula Student is the largest competition worldwide for engineering students and takes place every year on race courses around the world. With three overall victories and a points average of 920 out of a possible 1000, grimsel is AMZ’s most successful vehicle. The success also contributed to AMZ’s first place defense in the Formula Student world rankings, which they have held since 2013.