a1) Porous Polymer Actuators: A Matter of Speed, Sensitivity and Actuation Control 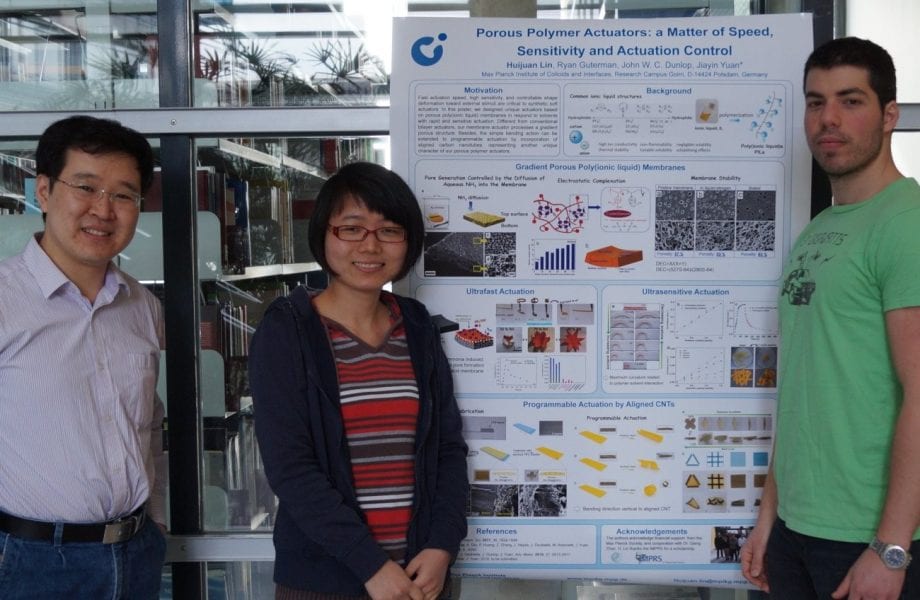 Fast actuation speed, high sensitivity, and controllable shape deformation toward external stimuli are critical to synthetic soft actuators. Here, we present the design of unique actuators based on porous poly(ionic liquid) membranes in respond to solvents either in a vapor or a liquid state with rapid and sensitive actuation. The membrane actuator was synthesized via electrostatic complexation between a cationic vinylimidazolium-based poly(ionic liquid) and an in-situ neutralized poly(acrylic acid). Different from conventional bilayer actuators, our membrane actuator processes a gradient porous structure along the membrane cross-section. The pores accelerate the diffusion of chemicals through the membrane, and the gradient induces unbalanced forces necessarily required to drive the actuation. Besides, the simple bending action of the porous membrane can be extended to programmable actuation by incorporation of aligned carbon nanotubes, representing another unique character of our porous polymer actuators. 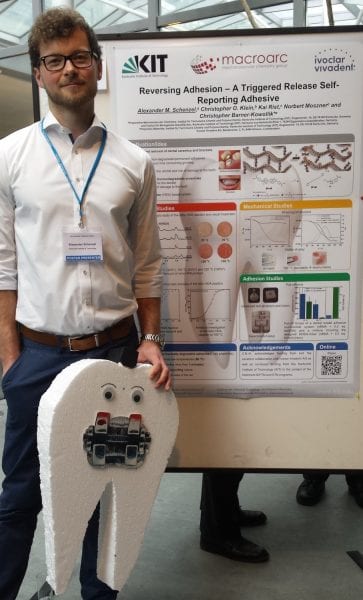 Alexander Schenzel and the winning poster on a self-reporting adhesive

A novel adhesive – generated via free radical polymerization – which can be degraded upon thermal impact (ca. 80 °C) within minutes is presented. The degradation is based on a Hetero Diels-Alder (HDA) moiety that is incorporated into the network, which also gives the system its self-reporting nature. The new reversible self-reporting adhesion system is characterized in detail starting from molecular studies of the retro HDA reaction. Moreover, the mechanical properties of the network, as well as the adhesion forces, are investigated in detail and compared to common methacrylate-based systems, demonstrating a significant decrease in mechanic stability at elevated temperatures. The present study thus represents a significant advance of the current state of the art for debonding on demand (DoD) adhesives, making the system interesting for several fields of application including dental adhesives. 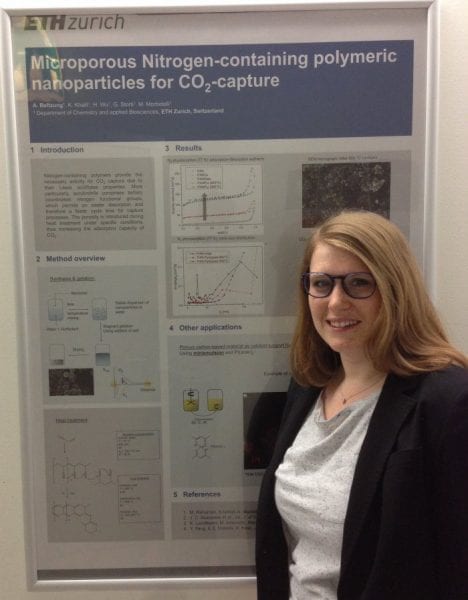 This project aims at the synthesis of macroporous clusters suitable for CO2 capture by controlled aggregation of polymeric nanoparticles containing Nitrogen. Acrylonitrile was chosen as the monomer for two main reasons: (i) the ternary-coordinated cyanide group, which is active enough to promote CO2 binding while keeping the desorption easy for regeneration and (ii) the resistance of polyacrylonitrile to heat treatment mainly thanks to the cyclization of neighboring cyanide groups. Synthesis of polyacrylonitrile by emulsion polymerization resulted in a dispersion of nanoparticles which was destabilized to form a gel-like structure exhibiting macropores, thus providing easy access to CO2. After drying and sieving, the resulting powder was thermally treated under very specific conditions, consequently creating micro- and meso-pores inside the nanoparticles providing loading capacity for CO2 adsorption. This material shows high thermal and mechanical resistances, thus exhibiting good potential for industrial applications at high CO2 partial pressure, such as in pre-combustion processes.

[ Details will be added when available ]

[ Details will be added when available ]

The Macromolecular Journals sponsored a prize for the best contribution. The prize was awarded to: 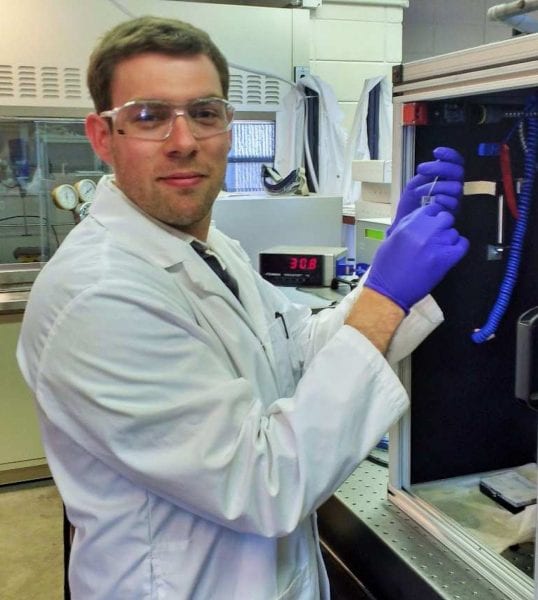 Functional monomers such as 2-hydroxyethal acrylate (HEA) are introduced into solvent borne acrylic resins to improve the properties of automotive coatings, and HEA is also an important component of contact lenses and other biocompatible material. However, the presence of hydrogen bonding in these systems significantly affects copolymerization kinetics, such that reactivity ratios and propagation rate constants become dependent on solvent choice. We have used pulsed laser polymerization (PLP) in combination with size exclusion chromatography and ¹H-NMR to systematically study these effects and measure the parameters needed for the development of a copolymerization model applicable for industrially relevant conditions. Semi-batch experiments are conducted to test and verify the model, and to explore the important influence of hydrogen bonding (affected by both HEA content and solvent choice) on side reactions such as backbiting that influence monomer concentration profiles, and polymer molar mass distributions and branching levels. 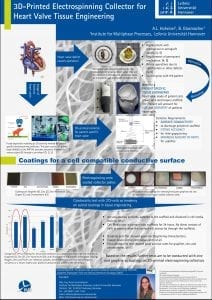 Current heart valve implants require a permanent medication with anticoagulants or revise operations. Tissue engineering aims to replace damaged tissue with tissue grown from patients cells. For electrospinning of heart valve scaffolds a collector as cast to the heart valve shape is necessary. Based on heart valve collectors already designed at the institute the design has been modified to fit the requirements of fused deposition modelling (FDM), a 3D-printing method. 3D-printing allows custom-made collectors based on 3D-images from patients heart valve. The FDM-printed collector is made of non conductive polymeric material which is coated afterwards for electrospinning. Five paints have been studied in this context. The adhesion of all paints to the collector was macroscopic good. All coatings were tested with electrospinning and cell toxicity tests for usability and biocompatibility. The paint containing zinc showed the best results. 3D-printed collectors for electrospinning are a good alternative to the common collectors. Very complex collectors such as heart valves as can be designed custom-made. The conductive coating can be carried out with paints. First cell toxicity tests showed promising results for the use in tissue engineering. 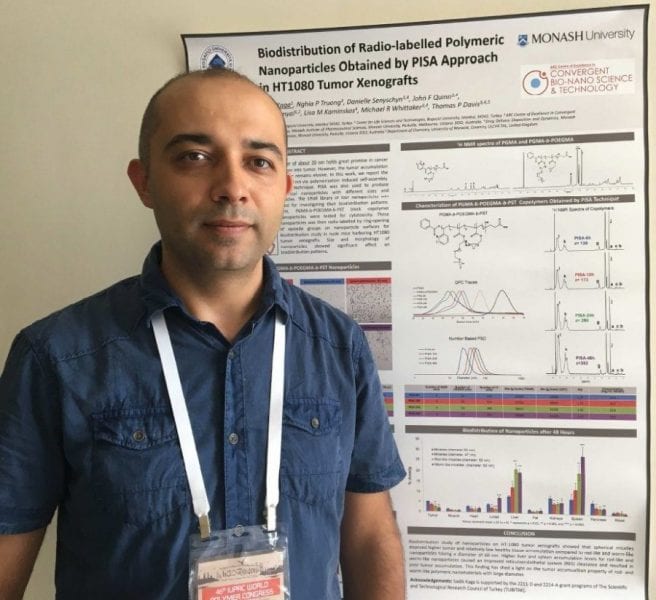 Sadik Kaga and the winning poster on macromolecules in biotechnology & medicine

Likewise other biocompatible nanosized structures, polymeric nanoparticles have been widely used in drug delivery and diagnosis systems for cancer and cardiovascular disease mainly due to their biodistribution properties. Several research groups have reported that non-spherical nanoparticles (with a diameter of 5-25 nm) less likely accumulate in major organs (liver, spleen and lung) and more likely accumulate in tumor tissue compared to spherical ones. However biodistribution of non-spherical polymeric particles with larger diameter is unclear. PISA (polymerization induced self-assembly) technique was used to generate non-spherical nanoparticles with desired larger diameters. Radiolabelling of sufficient epoxide groups on nanoparticle surfaces was followed by ring opening of remaining ones for biodistribution study in nude mice harboring HT1080 tumor xenografts. Biodistribution study showed that spherical micelles disposed higher tumor and relatively low healthy tissue accumulation compared to rod-like and worm-like nanoparticles having a diameter of 60 nm. 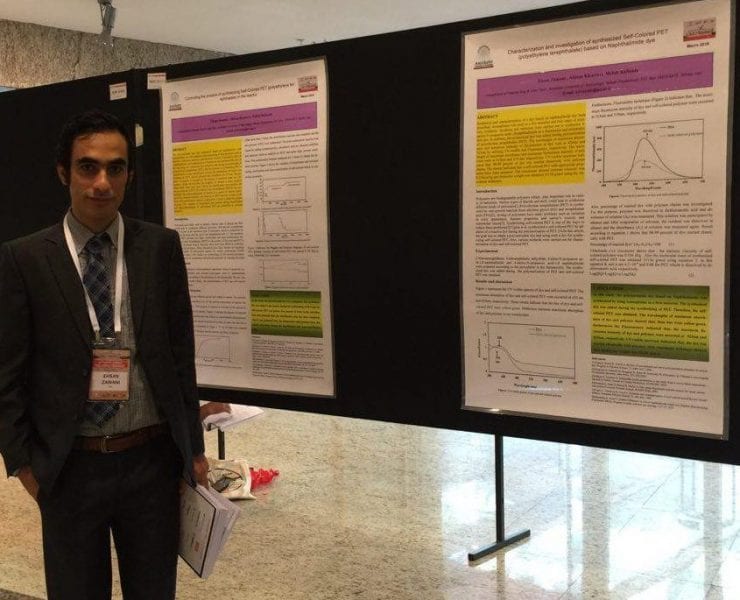 Synthesize and characterization of a dye based on naphthalimide has been described. Acenaphtene was used as a first material and four steps of nitration, oxidation, imidation and reduction were carried out to synthesize 4-amino-N-propanoic acid-1,8-naphthalimide as a fluorescent and polymerizable dye. In addition, the synthesized dye was added during polymerization of poly(ethylene terephthalate) (PET). The wavelength of maximum absorbance and maximum intensity of fluorescence of dye were at 420 and 523 nm by utilizing UV-visible and Fluorometery, respectively. The wavelength of maximum absorbance and maximum florescence intensity of polymer were at 410 and 519 nm, respectively. UV-visible spectrum indicated that, 98-99 percent of dye was reacted chemically with polymer chains. The results indicated that a self-colored PET with appropriate properties have been prepared. The viscometer showed inherent viscosity was 0.556cm³/g and molecular weight was obtained 35156 g/mol using the viscometer technique. 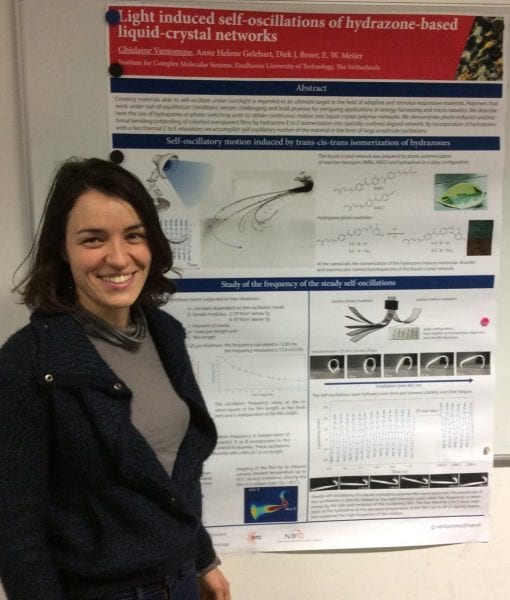 Ghislaine Vantomme and the winning poster on light induced self-oscillations

Creating materials able to self-oscillate under (sun)light is regarded as a real challenge in the field of adaptive and stimulus-responsive materials. Smart materials that can convert light into mechanical energy are emerging as powerful devices. Although light-responsive polymers that adapt their shapes and properties have been reported, materials that work under out-of-equilibrium conditions remain challenging and hold promise for intriguing applications in energy harvesting and micro-robotics. We use hydrazones as photo-switching units to obtain continuous motion into liquid-crystal polymer networks. 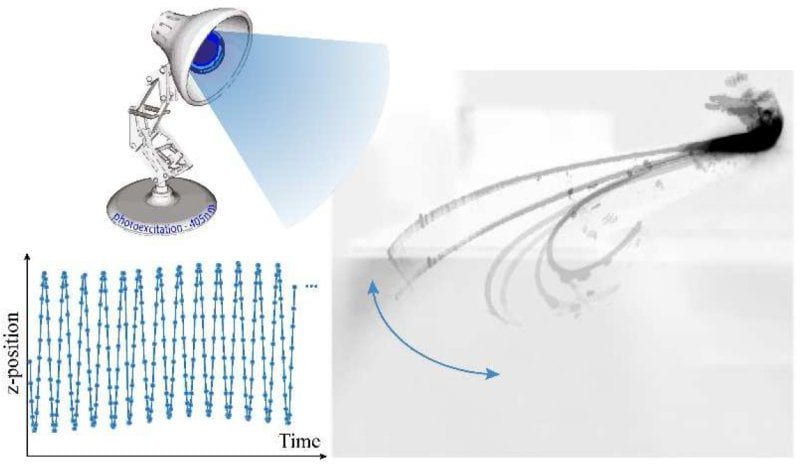 We demonstrate photo-induced unidirectional bending/unbending of colorless transparent films by hydrazone E to Z isomerization into spatially confined aligned network. By incorporation of hydrazone with a fast thermal Z to E relaxation in the polymer network, we accomplish self-oscillations into the material in the form of large amplitude oscillations under continuous, unpolarized, monochromatic light irradiation. 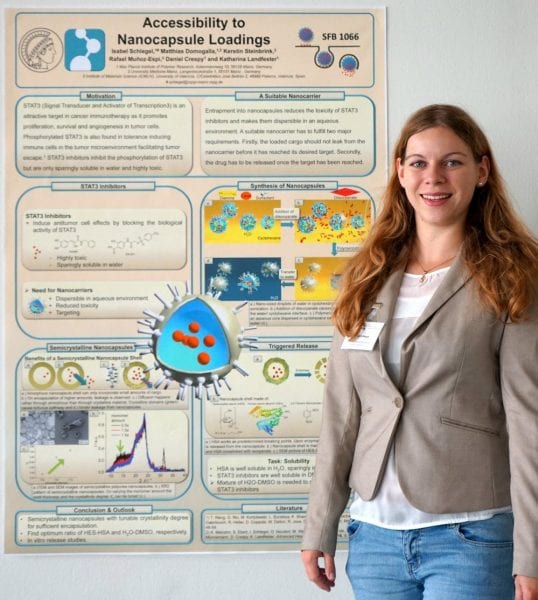 Isabel Schlegel and the winning poster on nanocapsule loadings

STAT3 (Signal Transducer and Activator of Transcription3) is an attractive target in cancer immunotherapy as it promotes proliferation, survival and angiogenesis in tumor cells. Phosphorylated STAT3 is also found in tolerance inducing immune cells in the tumor microenvironment facilitating tumor escape. STAT3 inhibitors inhibit the phosphorylation of STAT3 but are only sparingly soluble in water and highly toxic. Entrapment into nanocapsules reduces the toxicity of STAT3 inhibitors and makes them dispersible in an aqueous environment. A suitable nanocarrier has to fulfill two major requirements. Firstly, the loaded cargo should not leak from the nanocarrier before it has reached its desired target. Secondly, the drug has to be released once the target has been reached. 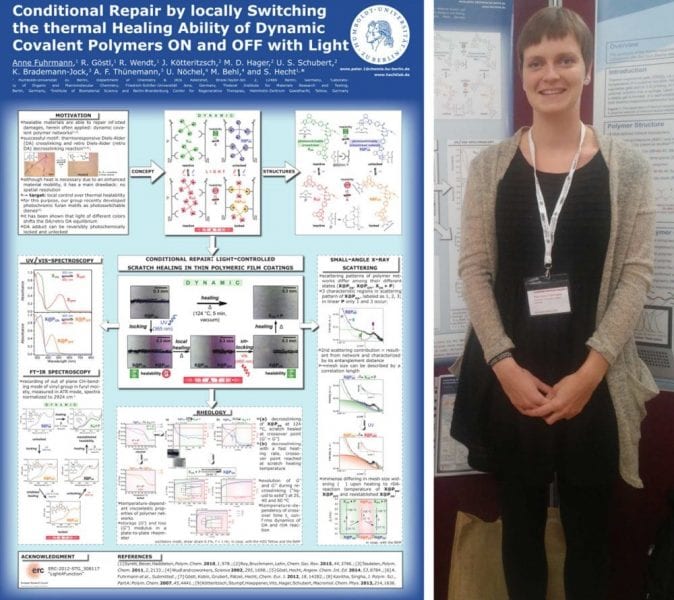 Anne Fuhrmann and the winning poster on dynamic covalent polymers

Healable materials have the potential to reduce the environmental footprint of our technological society through extending the life cycles of consumer products and constructions. However, as most healing processes are carried out by heat alone, the ability to heal damage generally sacrifices the parent material’s thermal and mechanical properties. Here, we present a dynamic covalent polymer network whose thermal healing ability can be switched ‘on’ and ‘off’ by light, thereby providing a new level of control while retaining the advantageous properties of global static polymer networks. We employ a photoswitchable furan-substituted diarylethene crosslinker, reacting with maleimide-containing copolymers via the Diels-Alder reaction forming strong covalent bonds while simultaneously allowing for the reversible, spatiotemporally resolved control over thermally induced de- and re-crosslinking by illumination with two different wavelengths of light. Herein, we demonstrate a control of the local healing of scratches in thin polymeric films.

h2) Simplifying the Synthesis of Polypeptoids 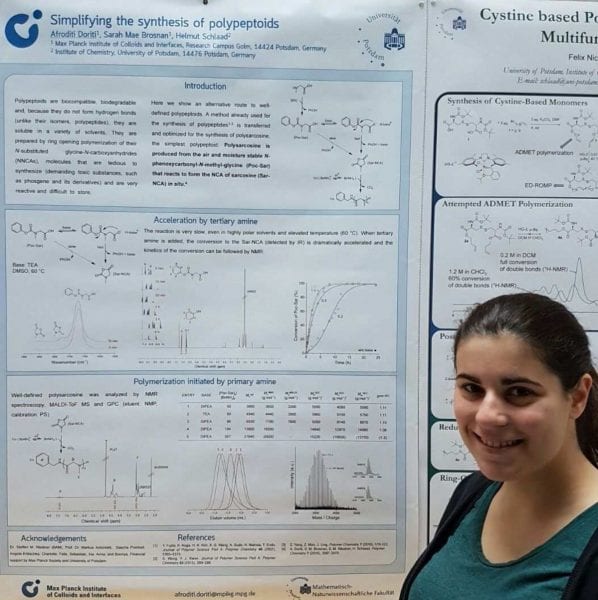 Polypeptoids, i.e., poly(N-alkylglycine)s, are promising materials for pharmaceutical applications as they are biocompatible and can be degraded by reactive oxygen species under physiologically relevant conditions. However, the tedious synthesis and the sensitivity of N-alkylglycine N-carboxyanhydride (NCA) monomers hinders their more widespread use. Herein, we report a method that simplifies their synthesis, avoiding the direct use of NCA: Polysarcosine is synthesized using the air and moisture stable N-phenoxycarbonyl-N-methylglycine (Poc-Sar), which reacts to form the respective Sar-NCA in situ. The formation of the NCA and subsequent polymerization, initiated by a primary amine, is accelerated by a non-nucleophilic tertiary amine base.

Back to Macro Awards Main Page