Our journals regularly sponsor prizes for the best poster or oral presentations at select international conferences. The prizes recognize excellence in the field, with an emphasis on young and aspiring scientists. 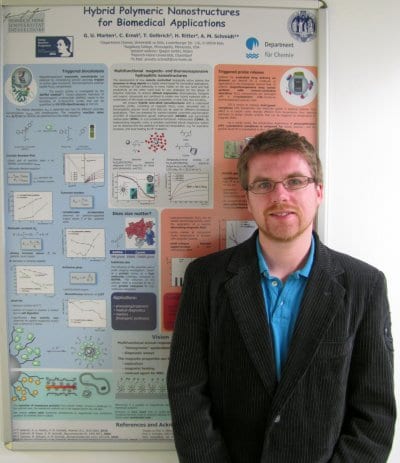 The combination of inorganic and organic building blocks provides new materials with interesting properties for special applications in the biomedical field. In our work we present hybrid core-shell nanostructures with a customized properties profile, consisting of magnetic cores, decorated with a biocompatible polymer brush shell. The magnetic cores provide a remotely controlled stimuli responsive system for separation purposes, and local heating by HF irradiation. The grafted polymer arms are formed by surface-initiated ATRP and prevent agglomeration by steric stabilization with great dilution stability. The main component of the polymer shell is based on oligo(ethylene glycol) methylether methacrylates. Due to the LCST of the polymer in water, the core-shell nanoparticles show a thermoresponsive dispersion behavior. Additional functional groups like active esters (N-hydroxysuccinimide) and β-cyclodextrin can be covalently introduced by copolymerization with functional methacrylates, thus providing a highly modular system. Accordingly, the hybrid nanoparticles can be tailor-made for several applications in biomedicine, e. g. bioseparation, biocatalysis and drug delivery.

a2) From Reactive to Multi-Responsive Polymers and Block Copolymers 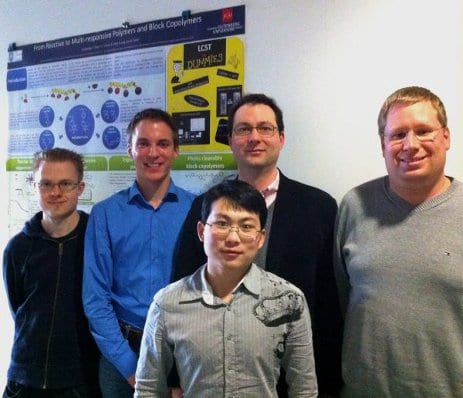 Multi-responsive polymers and block copolymers have gained tremendous interest in recent years and have been proposed for a series of different applications. The synthesis of such highly functionalized polymers with precisely defined molecular weight, composition, and architecture is, however, still a significant challenge. As such, the combination of two main synthetic methods, a) the direct polymerization of functional monomers and b) the post-functionalization approach, provides a possible solution to prepare well-defined multi-functional polymers.

In this project we combined the exceptional potential of post-polymerization techniques to generate libraries of highly functionalized (block) copolymers with the introduction of stimuli-responsive motives in order to produce smart polymer materials being able to respond to a large variety of stimuli. As an example, we synthesized and characterized stimuli-responsive polymers in respect to their reversible self-assembly into micellar structures. The synthesis was based on a post-polymerization modification of poly(ethyleneoxide)-block-poly(pentafluorophenyl acrylate) precursor polymers with different amines. The resulting block copolymer poly(ethyleneoxide)-block-poly(N-isopropylacrylamide) contained additional azobenzene moieties in the temperature-responsive block, which resulted in the control of micellar structures in water by light. 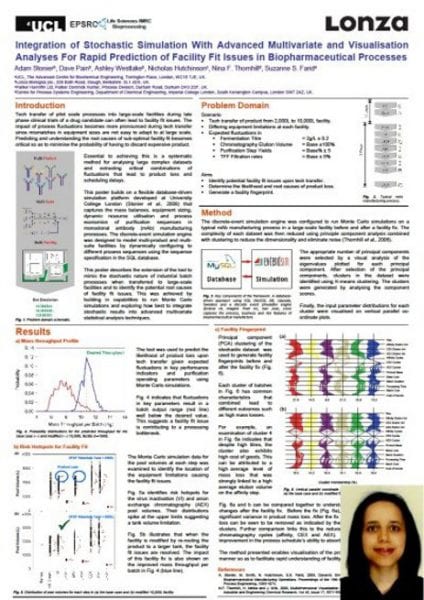 When pilot scale processes are transferred into large-scale facilities during late phase clinical trials of a drug candidate, the impact of process fluctuations becomes more pronounced since mismatches in equipment sizes are not easy to adapt to at large scale. Predicting and understanding the root causes of sub-optimal facility fit becomes critical so as to minimise the probability of having to discard expensive product and remove barriers to robust, scalable process design. Essential to achieving this is a systematic method for analysing large complex datasets and extracting critical combinations of fluctuations that lead to product loss and scheduling delays. This presentation described a decision-support tool that integrates Monte Carlo simulation data derived using a stochastic discrete-event simulation model to mimic process fluctuations with advanced multivariate statistical techniques to help pinpoint the potential root causes of sub-optimal facility fit issues. Principal component analysis combined with clustering algorithms was used to analyse the complex datasets from complete industrial batch processes for biopharmaceuticals. The challenge of visualising the multidimensional nature of the dataset was addressed using hierarchical and K-means clustering as well as parallel co-ordinate plots to help identify process fingerprints and characteristics of clusters leading to sub-optimal facility fit issues. Industrially-relevant case studies were presented that focus on technology transfer challenges for therapeutic antibodies moving from early phase to late phase clinical trials. The case study details how sub-optimal facility fit can be alleviated by allocating alternative product pool tanks. The impact of this operational change was then assessed by reviewing an updated process fingerprint. 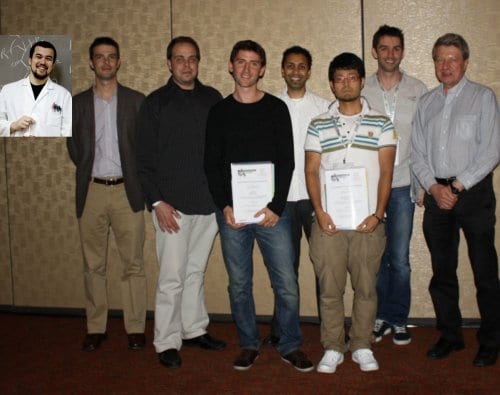 We studied the solubility in sc-CO2 of well-defined poly(vinyl acetates) with different chain lengths or end groups. Then, these materials were compared to novel amphiphilic poly(N,N-dimethylacrylamide)-poly(vinyl acetate) block copolymers (PDMA-b-PVAc) with varying chain lengths and compositions in order to design polymer surfactants with both sufficient solubility and amphiphilicity. Building on xanthate chain transfer agents for RAFT/MADIX polymerization, the critical macromolecular parameters for the design of PVAc-based amphiphilic polymeric surfactants for sc-CO2 were investigated.

Glycidyl methacrylate was successfully polymerized under ICAR ATRP conditions using a low concentration of Cu-based catalyst. Well-defined polymers were produced when diethyl 2-bromo-2-methylmalonate was used as the initiator. The initiation efficiency with ethyl 2-bromoisobutyrate was lower. The epoxide-containing polymers were used as precursors of multiazidated polymers (after reaction with sodium azide) and of fluorescent polymers (after reaction with nicotinamide and acetone).

The versatility of reversible addition-fragmentation chain transfer (RAFT) polymerization and its ability to produce diblock copolymers of low polydispersity has led to it being an extremely well-studied technique of living radical polymerization. The incorporation of an anchoring element into the R-group of a RAFT agent allows growth of a concentrated polymer brush on silica nanoparticles. Subsequent post-functionalization of the polymer affords further functionality to the hybrid particles.

This paper describes a new approach to the synthesis of hollow functional polymer nano-capsules exploiting gold nanoparticles as sacrificial templates. Two different functional diblock polymers were co-assembled on the gold nanoparticles prior to the gold removal. The block polymers (made by RAFT polymerization) consisted of a biocompatible polymer segment, either (poly(oligoethylene glycol) acrylate, P(OEG-A), or poly(hydroxylpropyl acrylamide), P(HPMA) and a cross-linkable segment comprised of an alternating copolymer of styrene (Sty) and maleic anhydride (MA), (Sty-alt-MA). The block copolymers were assembled onto the GNP surfaces using a grafting “onto” methodology exploiting the high affinity of the RAFT end-groups for the gold surface. The anhydride group was utilized to crosslink the polymer layer. Finally, the gold cores were removed using aqua regia without affecting the integrity of the polymers chains or the nanocapsules. All reaction and assembly steps were characterized by employing a range of techniques, such as TEM, XPS, ATR-FTIR, DLS and UV-visible spectroscopy.

We carried out surface-initiated atom transfer radical polymerization of 2-(perfluoro octyl)ethyl acrylate (FA-C8) on a flat silicon substrate in the absence and presence of ionic liquid to give poly(FA-C8) brush thin films with board molecular weight distribution (MWD) and narrow MWD. Receding and sliding contact angle show 80° and 35° at the surface of poly(FA-C8) with narrow MWD, respectively, whereas receding and sliding contact angle was 105° and 15° at the surface of poly(FA-C8) with board MWD. Grazing incidence wide-angle X-ray diffraction revealed that the orientation of perfluoroalkyl (Rf) groups in the surface region for poly(FA-C8) brush thin films with large MWD was perpendicular to the surface, whereas Rf groups were aggregated parallel to the surface in case of the poly(FA-C8) brush with narrow MWD. These results indicated that MWD of surface-grafted poly(FA-C8) affected the molecular aggregation state and orientation of Rf groups, relating with water-repellency of the brush surface. 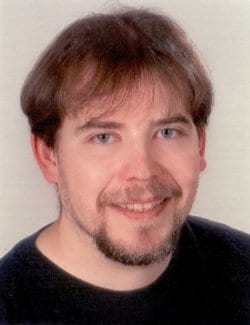 We report on the preparation and self-assembly of star-shaped organometallic crystalline-coil block copolymers with four arms. Poly(ethylene oxide)-block-poly(ferrocenyldimethylsilane) ([PEO50-b-PFDMS35]4) star-block copolymers have been synthesized via a combination of anionic and metal-catalyzed ring-opening polymerization. Self-assembly takes place in mixtures of THF and a selective co-solvent for PEO, leading to crystallization of the outer PFDMS segments. If EtOH is used as the selective co-solvent, organometallic capsules with a crystalline wall of PFDMS are formed and the stability of the resulting particles in EtOH or H2O can be partially attributed to the rigidity of the organometallic material. If acetone or MeOH are used, less defined “large compound micelles” are formed initially, with a pronounced tendency to form anisotropic superstructures within several hours. The underlying hierarchical processes have been monitored using light scattering (DLS) or electron microscopic techniques (TEM, cryo-TEM). 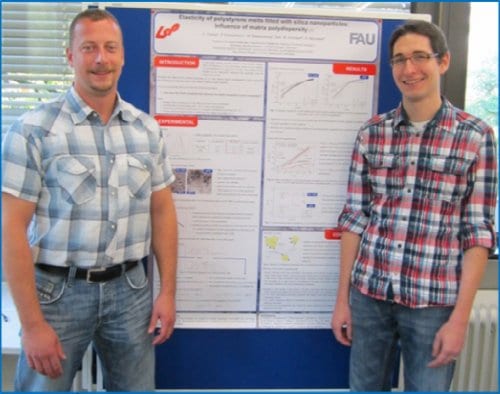 The key question is: “How does the matrix polydispersity influence the elasticity of polystyrene melts filled with silica nanoparticles?” A suitable measure for the elasticity is the linear elastic steady-state coverable compliance Je0 which can be determined by rheological measurements such as the creep-recovery experiment. Therefore, a broadly (PS 158K) and a narrowly (aPS) distributed polystyrene were used as the matrix polymer and composites with 1 vol.% nano silica were prepared, respectively. Due to their different polydispersity indices (Mw/Mn) the unfilled polymers already differ significantly in their rheological properties. Je0 is found to be one order of magnitude higher for the broadly distributed PS 158K which is in agreement with the literature. Also for the PS composites an increase of Je0 was found. Interactions between the polymer and the nanoparticles are assumed to be the origin of the raise in the elastic properties. However, the relative elasticity increase in the composites depends strongly on the basic elasticity of the neat matrix polymer. 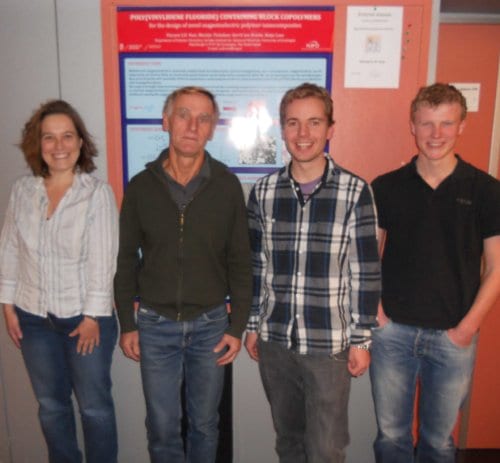 Multiferroic magnetoelectric composites, which incorporate both ferroelectric and ferromagnetic phases, offer the ability to couple to either the electric or magnetic polarization. The volume fraction of the two phases as well as the quality of interfacial adhesion between the two phases play an important role in determining the extend of the magnetoelectric response. An elegant way to freely tune the mentioned parameters is the use of the self-assembly of ferroelectric poly(vinylidene fluoride) (PVDF) containing block copolymers. Parameters such as the degree of polymerization, the Flory-Huggins interaction parameter and the composition of the block copolymers can be used to tailor the morphology. Subsequently, the obtained block copolymer nanostructure can function as a template for non-polymeric phases. For example, incorporating ferromagnetic materials inside a certain morphology will lead to magnetoelectric polymer-nanocomposites with tunable sizes. In order to explore the morphologies arising from the self-assembly of block copolymers containing poly(vinylidene fluoride), the synthesis routes towards these block copolymers have been studied recently. PVDF macroinitiators have been successfully synthesized via a functional benzoyl peroxide initiated polymerization, and the macroinitiators were used to initiate the ATRP of styrene, tert-butyl methacrylate and 4-vinylpyridine to form PS-b-PVDF-b-PS, PtBMA-b-PVDF-b-PtBMA and P4VP-b-PVDF-b-P4VP. The microphase separation of the triblock copolymers has been studied using TEM, and both lamellar and spherical nanostructures were found. 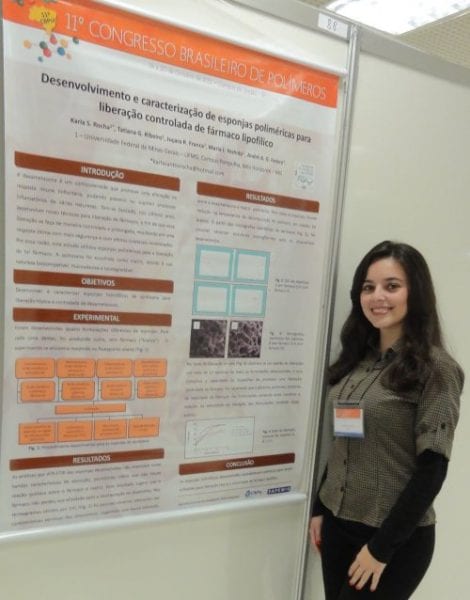 Return to the awards homepage