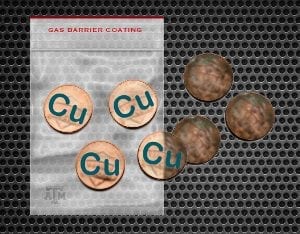 Polyelectrolyte coacervates can be deposited as transparent, high gas barrier coatings in a single processing step. Depositing a 2μm thick barrier film, by rod coating an aqueous polyelectrolyte complex onto a 175 μm thick polyethylene terephthalate film, improves the oxygen transmission rate by a factor of 120. The cover image depicts the ability to protect copper coins from oxidative degradation using this technology, but food, pharmaceutical and electronics packaging could all be aided by this coating. Read the full article here. 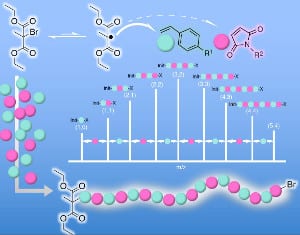 A malonate-based alkyl halide initiator (DEMM–Br) for metal-catalyzed living radical polymerization allows sequence analysis by MALDI-TOF-MS for alternating copolymer of styrene and maleimide derivatives. Electron density of the radical species from DEMM–Br is poor enough to induce selective initiation to styrenebased monomer, and thus the unit next to the initiator moiety can be defined to give simpler peak patterns in MALDI-TOF-MS spectra. Read the full article here.

A highly stretchable and autonomous self-healing film is obtained by the combination of Pt···Pt and π–π interactions into PDMS polymer. Owning to the mediate strength, the as prepared polymer can be stretched to over 20 times of its original length. When damaged, the polymer is able to completely heal at room temperature within 12 h without any external stimuli. Read the full article here. 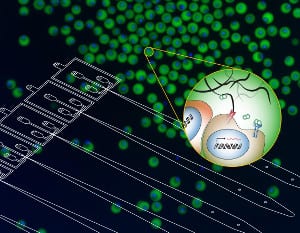 Droplet-based microfluidics is a powerful and versatile technique to prepare cell-laden hydrogel particles in the micrometer range, so called microgels (shown as green spheres laden with cells which are labeled in blue). Microgels allow for highly specific creation of a myriad of discrete and miniaturized mimics of the three-dimensional natural extracellular matrix that is composed of biomolecules, cell adhesion and degradation sites, as well as neighboring cells (represented by the inset). Lithography techniques allow for the design and fabrication of highly complex flow channels (silhouette shown) for upstream adjustment of the fluid streams and downstream manipulation of the droplets. Read the full article here.

Conjugation of agmatine to poly(methacrylic acid) can enhance the cellular uptake of the polymer by cancer cells. It is observed that only small amounts of guanidinium are required to achieve a visibly increased cellular uptake. These nontoxic polymers with zwitterionic structure can be useful for polymer–drug conjugates to assist the efficient delivery of drugs into cells. Read the full article here. 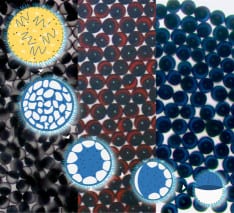 In this paper, it is shown how to determine the apparent olefin polymerization kinetics constants of multisite catalysts, such as heterogeneous Ziegler-Natta catalysts. This novel method fits simultaneously the molecular weight distribution, instantaneous ethylene uptake profile and cumulative polymer yield in a semi-batch reactor to determine the activation, deactivation, and pseudopropagation constants per site type in these catalysts. Read the full article here. 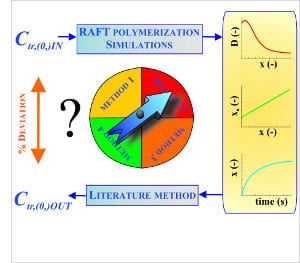 Under the validity of the degenerative transfer mechanism, the activation/deactivation process in reversible addition fragmentation chain transfer (RAFT) polymerization can be formally quantified by transfer coefficients. In the present work, the different literature methods to experimentally determine these RAFT transfer coefficients are reviewed and theoretically reevaluated. General guidelines on when which method should be applied are formulated. Read the full article here.

Homogeneous nanocomposites of low density polyethylene (LDPE) and cellulose nanocrystals (CNCs) can be produced by mixing aqueous LDPE slurry with aqueous CNC suspension and compounding such mixtures under low-shear conditions. They show an increase in stiffness and strength vis-à-vis the neat polymer. Read the full article here. 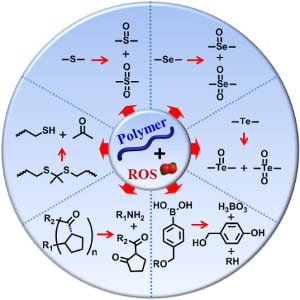 ROS responsive polymeric materials, including nanoparticles, scaffolds, and hydrogels, have received progressive attention for their potential in biomedical applications, such as drug delivery, tissue engineering, and antioxidation in vivo. ROS responsive moieties are capable of displaying unique variation under oxidative stress, such as hydrophobic-hydrophilicity transition and ROS-induced degradation. Representative polymeric materials containing ROS responsive units are summarized in this review. Read the full article here. 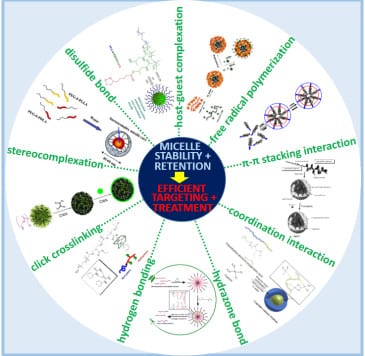 In this review, the most promising physico-chemical approaches to enhance polymeric micelle stability and drug retention are described, and how these strategies contribute to polymeric micelles with promising therapeutic efficacy in animal models, paving the way for clinical translation, is summarized. Read the full article here.

Return to the Best of Macros homepage